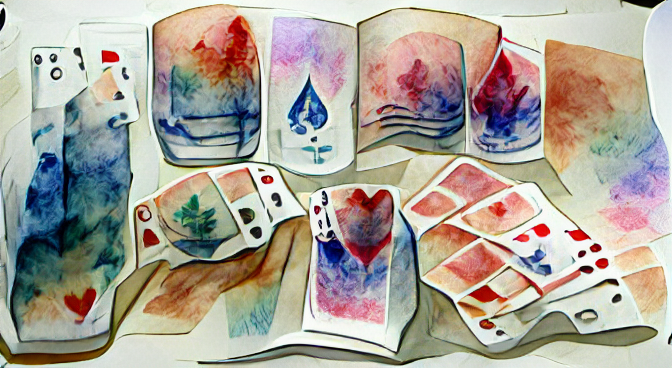 This is the introduction from my ebook, How to Design Card Games.

Designing a card game is messy. You will have what you think are good ideas that, when you play them, you find don’t work that well. With that in mind, start with a simple game and add complexity over time, as you play.

The key to agile development is to apply feedback and iterate. The breakthrough realization of the software industry was that people can’t anticipate all user requirements in advance but need to discover needs through exposure to prototypes and feedback. The same process works well for game design.

Inspiration strikes, and you get an idea for a game. Or you are challenged to come up with a game idea for a design contest, a homework assignment, a Scouting exercise, or a design challenge in this book.

Where do ideas come from?

For good or ill, I conceive of games the way Hollywood pitches High Concept movies:

Thinking in terms of mashups might help you come up with ideas as well. “If you steal from one author [or game designer] it’s plagiarism; if you steal from many it’s research,” said the playwright Wilson Mizner. Don’t feel bad about starting from such a point. Your idea will change and diverge from this initial inspiration as you develop the game further. In fact, your playtesting and development will consist of original research that will make the final product your own.

Another way to proceed is to take an existing game and constrain it. What would Monopoly be like as only a card game? What might Magic: The Gathering look like with only 104 cards?

Constraints help fuel ideas. And, as you look to develop experience by designing games, constraints make everything easier.

You will find that the hard part isn’t coming up with ideas: that’s a myth. Once you start looking for ideas for games, you’ll find them everywhere. You will quickly come up with more ideas than you develop. Keep a notebook handy to record your ideas as they come to you.

At this moment I have 36 ideas for games in my idea file (a list of games that I haven’t produced prototypes of yet) and I have 12 prototypes that I haven’t developed into finished games yet. Keep track of your ideas and you’ll find you have plenty. The hard part will be sticking with an idea, and then seeing it through to completion! So pick an idea and move to step 2.

2 – Document the Current State of Your Game Idea

Some game designers skip this step and immediately create their prototype. I don’t because I find that the act of writing down notes about the game often helps me come up with new takes on the idea. It’s easier to write down notes than it is to start making cards.

You don’t need to write the type of rules document that you would present to a player. You just need a short outline of the key parts of the game to help you organize your thoughts and explain the game to playtesters. It’s also helpful to create a quick table or grid of the ideas for cards.

For instance, here’s a grid of the cards in the first edition of Bruno Faidutti’s Citadels, by cost in gold coins and by district color, with the quantity of that card in the deck in parentheses.

Each purple building also has a special power, but many of those would probably be missing from a first draft and would be the subject of iterative development.

One mistake I’ve made is to spend a lot of time on the first prototype. I used to find great pictures from the Internet, carefully develop a graphic design of the cards, and even proofread and edit the text on the cards. Then set it all up on the computer, print out the cards, and play the game only to find out it was lousy!

Having spent all that time on graphic design, I ended up being reluctant to make the changes and to do the hard work of revision and iteration that is typically necessary to make a good game.

So don’t stress yourself about making the game pretty!

Instead, use basic cards. I’ll often just list the properties of a card on it. If I want some icons, I might make simple sketches. Like me, you can look at The Noun Project for quick ideas on how to make a simple drawing of an object:

Keep the card design simple for your playtests. If you’ve created a game worth playing, playtesters will be engaged even with simple graphics.

I still often end up spending too much time researching the inspiration of the card – the history of the Greek city of Olympia, railroad stock in the 1880s, the types of new planets being discovered – rather than spending time making sure the game is fun and playable.

So don’t worry, yet, about making the game a more accurate portrayal of the time period or theme. Don’t worry yet whether or not you have the right name for a card. You can do all that later.

Your goal at this step is simply to create a basic version of the game that you can use to make sure the game is fun to play and works the way you expected it to. Scribble on pieces of paper; write on index cards; even write on old playing cards.

Get your ideas down in a playable format, with the goal to move on to the next step as rapidly as possible!

Some games you can initially playtest just by yourself to make sure the basics are working as expected. However, it is always helpful to have someone to playtest with. But you need to make it clear to your playtester that you are not asking them to play a real game, and they should look at is more as an experiment. Often the best playtester is a good friend who is also designing games. That way you can return the favor and playtest their games.

Often much will need to be changed. In fact, don’t be afraid to stop play and write on cards to change them and start the game over. (Another reason to use rough rather than pretty prototypes, so you don’t mind writing all over them!) Remember, you are trying to see if the game works and is fun. You don’t need to play it through. My son and I were playing a game and kept changing the rules to make them work better when at one point we decided to start the whole game over. That’s fine!

If a solution is obvious to you and easy to implement, then by all means try it, but don’t feel you need to solve the problem during the play test. That can be the wrong time to fix big problems. Instead, during the game concentrate on identifying problems: solutions can come later.

After you have gone through these steps a few times (see below), you will want to playtest without changing. And eventually you will want to give the game to others to play without you around, just as they would if they bought the game or printed it out from the Internet. (This is called blind playtesting.)

But before you get that far, be prepared to playtest the game a lot. If you don’t want to play it lots, why would other people?! In fact, Puzzling Pixel Games requests that before designers submit a game the game “must be playtested so much that you now hate the game (well, maybe not hate…).”

Sometimes you can make changes to a game during the game itself or between games. But other times you identify problems with the game without easy or obvious solutions. In those cases, you will need to think about the solutions to the problems you identified.

Sometimes playtesters have good ideas. Sometimes, though, people leap to conclusions about a game based on a few plays. I’ve heard people say a game that was professionally published was “broken” after playing it once, when maybe they just misunderstood a rule or got a rare permutation of cards or events.

In science we would want lots of feedback to see if it was consistent over time. People, however, are used to jumping to conclusions and overgeneralizing. As you grow in experience you will start to develop a feel for the feedback that you should act upon versus the feedback that may not be as applicable as the players think.

Sometimes the feedback just won’t be relevant. If you have a vision or goal for the game, and some of the suggestions would have you abandon that goal, that’s feedback you should ignore. One playtester complained one of my games was “too mean” but the game was designed from the start as a “take that” type of game. Changing that would alter the fundamental design philosophy of that particular game.

If, after reviewing the feedback, you have changes you want to make, then go back to step 2 – document your game idea – and follow the steps from there. Acting on and applying feedback is the principal driver of agile game development.

If you think the game is as good as you can make it, if you’ve “played it till you hate it”, you are ready to start developing the game!

As you work on your game design, you will naturally refine it. You will come up with better ideas for card actions, better names for cards, and better ways of graphically representing some of the properties of the cards.

Once you have playtested the game and know that it works well, that is the time to write detailed rules and produce good-looking cards using graphic-design software.

You will still want to playtest the final text of your cards, and the rules, to make sure that they are clear to players and to eliminate any points of confusion.

Developing is often a time to take away complexity. You might realize that a common function is documented or performed slightly differently in two places. In such a case you should select the method that works best and make everything consistent. If you make major changes, then go back to step 2.

And, of course, you can submit the game to game publishers to see if they are interested in publishing the game for sale.

All of this might sound like a lot of work but you will discover that game design is loads of fun with lots of room for creativity. Happy designing!

What Other Implementations of Wordle Can Te[…]