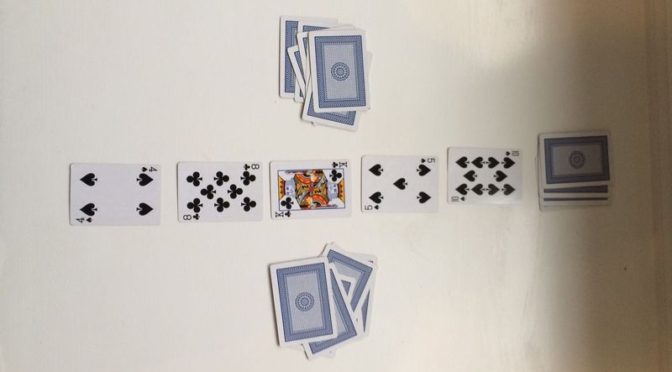 Your design challenge is to take a published card game and adapt it to use only a traditional deck of cards.

If you ever end up stuck somewhere with only a regular deck of cards to play with, you’ll be able to use that deck to play the game you invented!

Rummy Duel is a fast-playing version of Rummy for just two players. It is adapted from the game Schotten-Totten, by Reiner Knizia, in which two players compete while assembling 9 separate hands of poker, trying to win 5 of the 9 hands anywhere or 3 adjacent ones, to win the game.

Deal 7 cards to each player. Deal 5 community cards lengthwise between you and your rival and end them with the draw pile, also arranged lengthwise. The loser of the last game goes first.

A player starts by drawing a card of their choice. They can take it from the draw pile, or they can draw one of the community cards that has not had a claim staked to it (i.e., empty on both sides; see below). If they take a community card, they must immediately replace it with another card from their hand.

If the player can form any type of meld — a run (three cards in a row, of one suit or any mix of suits) or a set (three of a kind, all of the same suit) — then they may play that to their side of any community card to stake a claim to it. (Aces can start or end a run but can’t go “round the corner”: ace, 2, 3 and king, queen, ace are valid runs, but king, ace, 2 isn’t.) A meld, once placed, can’t be moved to another community card. If the current player can’t play a meld, they say “Pass” instead.

To win a community card, the player must have a higher value than the opponent: comparing the high card of a run (3 to ace), or the high card of set (2 to ace) – a set always beats a run, even a run all of the same suit. So a 2, 3, 4 run beats an ace, 2, 3 run, and a set of kings beat a set of queens. In case of a tie, neither player wins the community card.

Each player tallies the rank of each community card they won (aces are worth 14). The high score wins. The tie-breaker goes to the player with the fewest cards in hand.

Ironically, this was one of the hardest challenges for me to complete, as I typically like more thematic games. And I originally thought Rummy was a terrible game to start with, thinking that variants of it had been pretty much exhausted, before I realized it had so many possibilities that I proposed it as an idea for the first challenge. Finally, I remembered Schotten-Totten and wondered what if it was 5 melds of rummy instead of 9 hands of poker?

My first rules were pretty barebones:

Given the width of 7 community cards arranged lengthwise, I reduced it to 5 cards upon initial play. It quickly became clear that players need to say “Pass” if they weren’t playing a meld. And once I realized the tally of the community cards I had won exceeded what my rival could claim, I called “Rummy” and won. The playtests also revealed a need to be more specific about the end cases.

On subsequent plays, I decided that drawing a face-up community card without discarding was too powerful and required the card to be replaced from the player’s hand.

While this challenge might seem simple, it’s meant to get you experienced iterating on game design without the need to create a prototype yet. So please give this challenge a try.