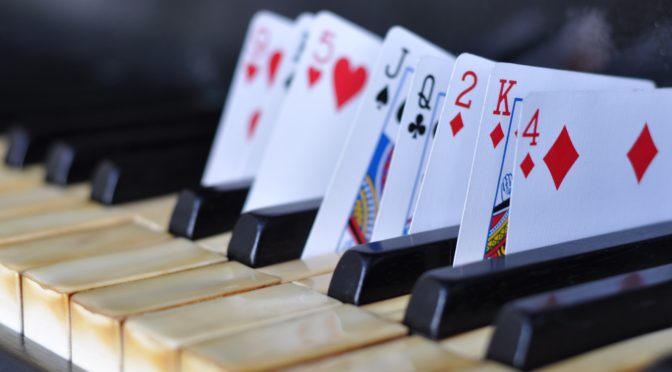 If you’ve never designed a card game before, it can be easier to start by adding house rules to an existing game.

Here are the top 10 card games that Americans played in 2016 (excluding gambling and adult games):

If you don’t have access to many card games, there are thousands of card games that you can play for free. Get a deck of traditional cards and a library book on card games. Some libraries also let you check out card games for use in the building. Or buy these great Dover books: A Gamut of Games and Card Games Around the World by Sid Sackson, Board and Table Games from Many Civilizations by R. C. Bell, Games and Fun with Playing Cards by Joseph Leeming, and Favorite Board Games: You Can Make and Play by Asterie Baker Provenzo and Eugene F. Provenzo, Jr.

You can also download many card games as free apps from Google Play or the Apple App Store. And the online site Yucata.de has many modern games that you can play for free against other users.

Looking for ideas for new rules? Make some actions for special cards. Here are some nicknames for cards in a traditional deck:

Different traditional card games often have certain rules involving named sets. Add some other named sets, or change around the winning value of certain sets. Some named sets for inspiration:

Many popular mainstream card games are just versions of traditional card games with a dedicated deck and some house rules:

Still uncertain where to start? There are lots of varieties of Rummy out there, with many collections of house rules. Start with a grab bag of house rules collected from others, then organize those into your own game.

One of the favorite games of Grace Mary Gilchrist, my great aunt, was 99. Each player had 3 lives (represented by 3 pennies apiece). Each hand involved dealing everyone 3 cards. A player would then play a card of their choice on the discard pile, announce the new running total, and draw a replacement card. For instance, the first card might be a 5. The next player might play a 7, making the total 12. The first player to go over 99 would lose the round and would surrender a life (a penny). The game would continue until all but the final player were eliminated.

On an index card my great aunt had written the special values for certain ranks of cards:

(Note that some families play by slightly different rules for these cards and that there’s a different card game also known as 99 that involves trick-taking.)

I always preferred 99 to Uno because it was quicker, built to a conclusion (had a story arc). It also has some interesting strategy to it. The game is often described as a good game for teaching children to add yet it is not great for that, as you can’t add by 4 or 9 since those cards have special meanings.

So here are my house rules for 99:

Games that eliminate players aren’t always fun, especially with big groups. So instead, if you lose, you take a penny. The last player with no pennies in front of them wins!