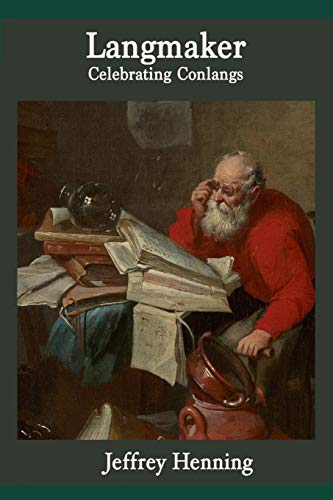 Twenty-five years and one week ago, I started an ASCII-email newsletter that I began posting on Compuserve. Its masthead and introduction:

Back in 1995, I hadn’t met anyone who shared my interest in inventing languages, and I hadn’t yet discovered that there was a name for this hobby. My first attempt at a model language did not emulate Tolkien, but copied Clyde Heaton’s Orcish, a language he published in an article called “Even Orcish is logical” (Dragon magazine, July 1983), which started me on this hobby. While I had already read The Hobbit, The Lord of the Rings, and part of The Silmarillion, I had not yet encountered Tolkien’s essay, “A Secret Vice,” in which he wrote:

What range of accomplishment there is among these hidden craftsmen, I can only surmise — and I surmise the range runs, if one only knew, from the crude chalk-scrawl of the village schoolboy to the heights of palaeolithic or bushman art (or beyond). Its development to perfection must none the less certainly be prevented by its solitariness, the lack of interchange, open rivalry, study or imitation of others’ technique.

This “lack of interchange” was something that I realized, even in 1995, online communities could address. I received enough encouragement from others to continue the newsletter for eight issues, into February 1996, and was introduced to the CONLANG mailing list, started in 1991; sort for constructed language, conlang is now the most frequently used term for this hobby. Not long after, I launched my first website, http://ourworld.compuserve.com/homepages/jeffrey_henning, now lost even to the mists of Archive.org (which only records a redirect to my next site).

I decided to write LangMaker for Windows, a simple program to help people create lexicons from sound changes. I sold a few dozen copies as shareware (the free version limited lexicons to 100 words) and registered the domain name Langmaker.com.

I evolved that from a static site to a site that accepted submissions. I eventually wrote Visual BASIC code to generate the web pages from databases. The site grew pretty elaborate and made just enough from Amazon affiliate revenue to cover its hosting costs. But at some point, I believe when our youngest son was born, the site crashed and ate its backup databases. By that point, fully restoring the site was more work than I was willing to put in, and I let the domain name expire and the site vanish to the mists of time.

But last year on a trip to Chicago I visited with Mark Rosenfelder, a former colleague (whom I had originally met because of his Zompist.com website). He was telling me about his book publishing and the appetite from his readers for conlinguistic nonfiction. We agreed publishing my former articles and essays might make a good book.

In the ensuing months, he threw himself into editing and refining the text. It’s the rare editor who can catch grammatical mistakes in a language the author invented! He cleaned up the essays and inconsistencies, and now Langmaker: Celebrating Conlangs is available from Amazon as a paperback and Kindle.

If you were one of those solitary inventors of languages, or someone who takes pleasure in the invented languages of your favorite imagined worlds, I hope you’ll find the book enjoyable.

Crypt of the Death Giants