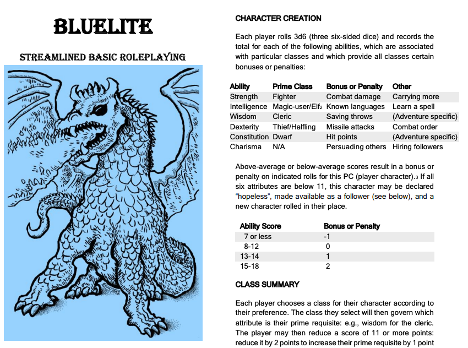 “I really dig what you’ve done here. You’ve distilled Holmes Basic down to a really useful base that can easily be expanded on.”

BLUELITE is designed for playing classic Level 1-3 RPG adventures with the standard abilities and classes but with fewer rules (i.e., “with the flavor but not the crunch”). BLUELITE is Holmes Basic with the rough edges rounded off, a streamlined schematic hack using a common d20 mechanic where higher rolls are better. Probabilities of success approximate the original but on a d20: for instance, a 2-in-6 chance to force open a door is now a 14 or higher on a d20.

Keep in mind in the original, opening doors was rolling low on a d6, turning undead was rolling high on 2d6, doing thievery and learning spells required rolling low on percentile dice, and combat was rolling high on a d20 involving a lookup table! Holmes Basic also had a tendency to overwhelm with details that were rarely used (e.g., a saving throw against dragon breath). This redesign looks for themes then applies them consistently, removing exceptions and spurious precision. End notes at the back discuss some of the changes I made from the original.