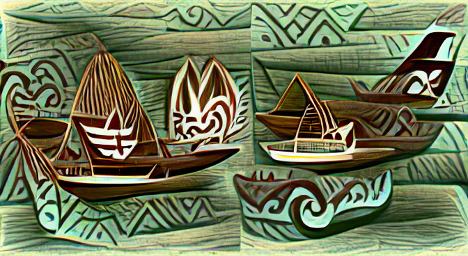 During the summer of 2016 I read the great book, Pacific Languages: An Introduction, by John Lynch, with the intent of creating a Polynesian artlang. In November that year, I named the language Gana fa Folua, and I collated 37 roots for pronouns, from Pacific proto-languages. And then I did nothing more with it.

Then, the last Sunday in August, 2021, my son and I played the board game Kahuna, which has islands with invented names (in alphabetical order).

The island names were so badly designed (for instance, ‘c’ is almost never used to represent /k/ in Polynesian languages) that it prompted me to try once again to create my Polynesian artlang.

I renamed the language Kote Taui, and I decided I’d spend 15 minutes a day on the language, over my morning coffee. I started by reading The Journal of the Polynesian Society and the Polynesian Lexicon Project. Here were my first six words (and what they look like now).

One of the conceits of the language, compared to actual Polynesian languages, is that words often have meanings across multiple parts of speech.

These all survived as is, except for engafulu, which became ahulu.

I used the Streaks app to inspire me to work on the grammar for at least 15 minutes each day in September. That was successful, but having written a one-page grammar (all conjugations and declensions) for my previous language (Denju, covered in Langmaker), I didn’t think that 30 days later I wouldn’t be done! I’d written 9,600 words and 29 pages but had a lot of questions.

I decided to take a break from the grammar. “Lexember” is the idea of spending time each day on generating your conlang’s lexicon. My goal for October (Lexober?!) was to expand the lexicon so that I could later create example sentences for the grammar. But every time I marked an item off my to-do list, I added two new items to it. For instance, after I glossed a sentence to give examples of article phrases, I then realized that I needed to document the abbreviations I use and distinguish noun phrases from article phrases. At some point during the month I changed the name of the language to Muna Lingi (< muna, language + lingi, song).

One of the fun things about designing an artlang from the perspective of a non-native speaker, using proto-languages, is not knowing what a word means or how the vocabulary might be structured differently than English. For instance, I knew munifa was the name of a constellation, I just don’t know which constellation. I was shocked to realize the language had no word for “brother” or “sister”: the distinctions instead being “sibling of the same sex”, “sibling of the opposite sex”, “elder sibling”, and “younger sibling”:

By the end of October, I had 850 words, even after deleting 80 words that no longer fit my vision for the language. I concentrated on those words that were cognate is the most Polynesian languages, using the POLLEX database, and trying to limit myself to those words found in 10 Pacific languages.

For “Novemmar” (that would be Mia DeSanzo’s neologism for spending November on grammar), I went back to the grammar. I was surprised to learn the language had a classifier system (which I’d end up redoing extensively) and directional particles, which I used to signify the end of serial-verb constructions.

For the tenth anniversary of Lexember, I exhorted others to join in. I had a goal of creating 10 words a day in Muna Lingi, and by the end of the month I was up to 1,094 words. Weirdly, on the 27th day of Lexember, I realized I wasn’t satisfied with the phonology. It turned out only 2% of the words had /s/, so I changed those to /h/ instead (a sound shift that was actually already in about 2% of the etymologies). Here are some of my favorite words from Lexember that survived into the final language:

Conlanging over coffee in January for me was all about adding example sentences to my grammar, like this:

Muna Lingi has four conjunctions that can join determiner phrases together as part of a series:

ange [PN age, particle of direction away from speaker and hearer; also used to express comparison.] p. determiner-phrase conjunction. Is better than (comparative).

kae [PN ka-e, but; and (then).] p. determiner-phrase conjunction. But not.

maa [OC ma.4, and, with.] p. determiner-phrase conjunction. And, with.

pe [PN pe, or, whether.] p. determiner-phrase conjunction. Or.

A sentence a day was the goal. Instead of Lexember, Sentuary?!

I also submitted an article about Muna Lingi to the quarterly publication of /r/conlangs, Segments: “Leveraging Body-Part Terms for Lexical Expansion: Word Formation in the Muna Lingi Polynesian Conlang”. Thanks to going through that submission process, I learned that Segments has a standard list of abbreviations for glossing sentences. Great resource! I ended up rewriting my glosses accordingly.

I managed to meet my January goal of finishing the first full draft of the Muna Lingi grammar! For February, I wanted to QA the glosses and be more consistent about how I handled them; they were a mix of abbreviations and styles. This turned out to be hard; it’s difficult to write correctly in a language that keeps changing. While I thought in February I could QA all the glosses in the grammar, I ended up creating new glosses as well, so two months later there are now 66 example sentences in the grammar. For March, I had another 13 to do, then I wanted to QA the syntax rules. I ended up QAing old glosses and writing new glosses throughout April, and I just did a quick sanity check of the syntax rules.

Oh, and since we’re talking about month names. I may not know what constellation Munifa represents, but I do know which lunar month it represents. Months were full moon to full moon (29.5) days in length meaning the year was 354 days long and in need of a leap month about every three years. The records don’t indicate which was the leap month, but since Munifa was sometimes used by itself as a month name the presumption is that the names Munifa-mua and Munifa-muli were only used on the occasion of a leap month. ​​

It took me eight months (lunar or calendar) but I finished Muna Lingi! Here’s the PDF, the publication as a Google Doc, and a Google Doc that you can post comments on. You too can create a complex language on 15 minutes a day!

A Nation of Gamers: Two Thirds of Americans[…]