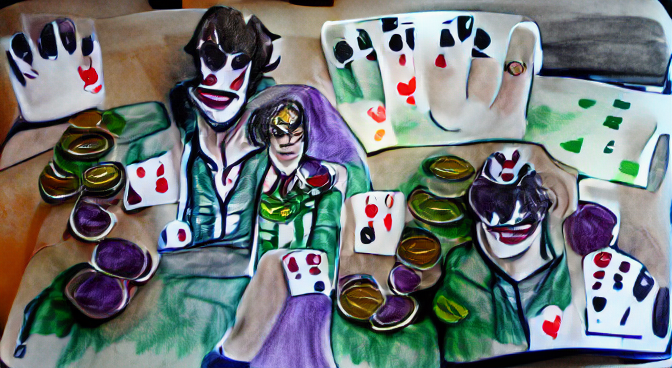 Tl;dr: Seven-card stud, low card in the hole is wild, follow-the-queen is wild, suicide king has to fold, face-up joker means you have to shift your hole cards to the right.

Whenever we get together with my brother-in-law and his family, we inevitably play poker. This time, we started with 7-card stud, then played follow-the-queen, then low-card-in-the-hole. At that point, I was ready to fully embrace chaos, and I combined them!

I added that if you were dealt the suicide king face up or in the hole, you had to fold at the first available chance (a favorite add-on rule of two other nephews).

Then, stealing an idea from Fluxx, I decided to add in the jokers as the “Rotate Hands” card.

My brother-in-law had never played a poker game with jokers before, so he was suitably horrified.

Note that you’re probably not going to win with anything less than 4 or 5 of a kind, but given the sheer randomness of the game, you might not want to fold too soon.

To design your own, less chaotic card games, check out my series of blog posts on Agile Development for card games.

Illustration credits: Title graphic copyright 2022 by Pixray. Permission granted for non-commercial use. Public domain comparison of the King of Hearts of the Ruen pattern.

Holmes Basic Reveled in All the Polyhedral […]