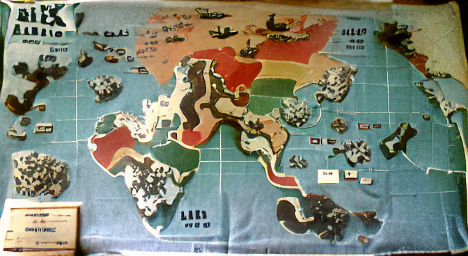 When my youngest had a random Friday off from school last October, and my wife was on holiday with our sister-in-law, I asked him how he wanted to spend the long weekend. “Playing Axis & Allies!” he said. We started with the 1984 Revised Edition of the Milton-Bradley game and played that each day. I kept winning, so I suggested we get one of the newer editions, for which I’d be less familiar with the strategies. (I played the 1984 edition a ton in high school and college.)

Given the length of the MB game, I was excited to see Axis & Allies 1941, a more streamlined edition. Regions have lower IPC values, and – unlike the 1984 edition – every industrial complex has a cap on how many units can be produced. This cap really changes the strategy – no longer are you just buying stacks of infantry, as that leaves money unused.

As a result of these changes, the game plays much faster. But I was still surprised at the complexity for what is now envisioned as the on-ramp to a product-line rather than being the sole WW2 game in their lineup.

As in other editions, you begin your turn by purchasing units that won’t be placed until the end of your turn, forcing you to think through combat moves and anticipate how they will go and guess what you will need as a result. You have to imagine your whole turn before doing anything, which can easily lead to analysis/paralysis and being overwhelmed.

Other complexities abound. If you move a fighter in combat that will need a carrier to be in a specific location at the end of its non-combat move, you must declare that up front and commit to the movement (non-combat moves are a separate phase). There are exceptions to the exceptions. Ships can’t move through sea zones with hostile surface ships, except for submarines, except when destroyers are present. A submarine in a battle can do a surprise strike as well as avoid air hits, unless an enemy destroyer is present, unless that enemy destroyer is from a different power, unless defending. A transport is never part of battles but gets destroyed as soon as all other ships from that side are defeated, etc.

Were I making an introductory game, I would have printed silhouettes of the units that start in each territory on the board, to speed setup (which admittedly is streamlined from other editions due to having fewer regions and less units).

In any event, after playing the Rules As Written a couple times, we rewrote the rules. We named our variant WW2 1941 ABC because turn order has been simplified to ABC: Advance your units (whether into combat or not), Battle, then Create and place new units. Since new players often try to do non-combat moves at the same time as combat moves, we eliminate this being two separate phases.

Since the limit on production discourages infantry stacking, prices are discounted (roughly divided by 3): infantry cost 1, tanks and subs cost 2, destroyers and transports cost 3, fighters and bombers cost 4, carriers cost 5, and battleships cost 6. To further discourage infantry stacking, income not spent is lost. As a result, Germany’s income of 12 and ability to produce 4 units means it would never produce 4 infantry (wasting 8 income): it might want to produce a battleship, fighter, and 2 infantry or instead a bomber, a fighter, and 2 tanks. (Bonus: you’re less likely to need those cardboard chits the game comes with to represent stacked units.)

Special abilities of units have been streamlined and systematized, and in the process amped up. All abilities are now given a name, shown on a summary table, and called out and documented in the rules. Other changes:

You can download the PDF or comment on the Google Doc. I hope you enjoy playing the game as much as we enjoyed making it.

1973 Implementation of Wordle was Published[…]