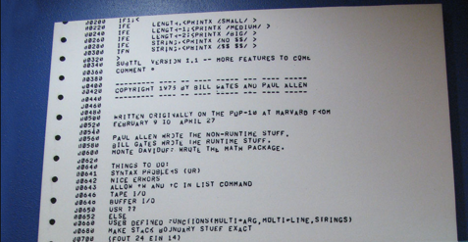 I synthesized nine Wikipedia articles into a new article dedicated to BASIC interpreters:

A BASIC interpreter enables users to enter and run BASIC programs and was, for the first part of the microcomputer era, the default application that computers would launch. Users were expected to use the BASIC interpreter to enter in programs (often from printed listings) or to load programs from storage (often cassette tapes).

Why do I think a new article is warranted, rather than just referring to the BASIC and Interpreter articles? As I write in the article:

BASIC interpreters are of historical importance. Microsoft’s first product for sale was a BASIC interpreter (Altair BASIC), which paved the way for the company’s success. Before Altair BASIC, microcomputers were sold as kits that needed to be programmed in machine code (for instance, the Apple I); after the MITS Altair 8800, microcomputers were expected to ship with BASIC interpreters of their own (e.g., the Apple II, which had multiple implementations of BASIC). A backlash against the price of Microsoft’s Altair BASIC also led to early collaborative software development for Tiny BASIC implementations in general and Palo Alto Tiny BASIC specifically.

As software for microcomputers developed, you could use the interpreter just to CLOAD and RUN assembly language programs. Those might call BASIC ROM routines (say, for converting ASCII input to binary or vice versa). So BASIC interpreters were a proto-operating system.

BASIC interpreters were the command line, the primary UI, for tens of millions of microcomputer users. They powered hundreds of BASIC dialects and had specific techniques tailored to the language and early computers that differ from modern implementations of interpreters. An article on a specific BASIC won’t compare and contrast techniques. The synthesis is to start the article; I’ll add additional content over time.

Some of the content I added to my synthesis:

Anyway, I’d love you to review the article and let me know where it is unclear or add to it if you’ve ever used BASIC interpreters in the past. Many thanks!