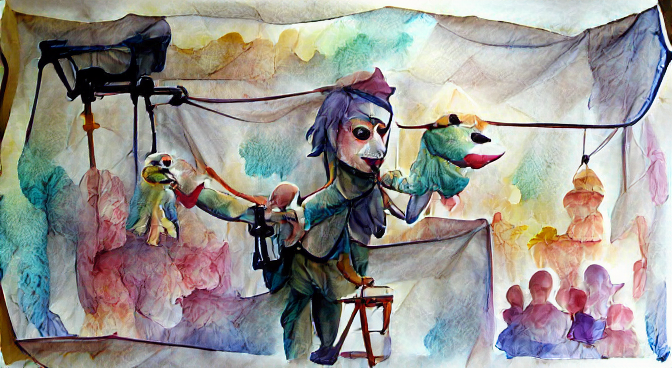 I love Rob Donoghue’s idea for having a move for each PC when their player is absent:

I want to write up a set of moves, one per player, that can be used once per session to represent the influence of absent characters. So “Jack knows a guy” may allow the current game to hook up with a useful NPC when Jack isn’t at the table. I doubt this is something that many games need, but for my rotating cast, I think it’ll be a nice way to keep it feeling like everyone is in circulation.

So, for instance, if Pete is again not around to play Perg, once per session any other player can have Perg bang the war drum to give you all a +1 forward, but that player will lose 3 hp from the psychic clamor.

If you like the idea, write up a move (with a pro and a con rather than a roll) for your character for when you can’t make it.

My Dungeon World campaign has five players but most sessions we only have three or four players attend. Yet we still want to incorporate missing players’ PCs into the game for verisimilitude. It breaks the fiction when another player says something like, “You know, if Rook [our thief] was here, we could have him talk to his contacts to tell us what’s probably going on.”

Other techniques I’ve tried over the years:

For my current Dungeon World campaign, not only are the PCs there – they can be called upon to play one of their regular roles, building on Rob Donoghue’s idea. Some samples of the moves the players wrote:

Another rule we follow: No PC can be killed if their player isn’t there. Worst case, if there was a TPK of the characters of players present, the characters of players not present would be left for dead but would have in fact survived (not that this has ever happened, but it was a subject for discussion in Session Zero). Typically, in combat we consider missing players to be ineffectual. I’ve been meaning to adapt this rule meant for monsters to such situations: “If multiple creatures attack at once roll the highest damage among them and add +1 damage for each [creature] beyond the first.”

Now, in one situation, we did make a hard move against an absent player! In a prior session, the wizard had cut the paw off a jaguar corpse and performed a ritual to create a spell to attach it in place of the thief’s severed hand. When casting the spell, the wizard chose: “You draw unwelcome attention or put yourself in a spot. The GM will tell you how.” Since the spell was cast in the desert, of course a sandworm with a rider eventually arrived, ending the session on a cliffhanger. On the next session, when the wizard’s player was absent, the rider wanted to kill the wizard for desecrating a place of power, but the paladin negotiated and the rider decided that severing his hand would be sufficient punishment. The other players didn’t want to do this to an absent player, until they read his away move. He had literally labeled one of the moves “Need a hand”! So the wizard’s hand was severed, and upon the player’s return, he laughed and agreed it had been completely proper! And now he is working on a ritual to create an invisible hand from an Unseen Servant.

If you too struggle with adventures where not every player can attend every session, I encourage you to think of moves the active players can call on, that keep absent players’ characters present. It has worked great for us; in fact, one of our favorite stories from the campaign happened when a player was absent. So give it a try!

What Other Implementations of Wordle Can Te[…]