What Other Implementations of Wordle Can Teach Us 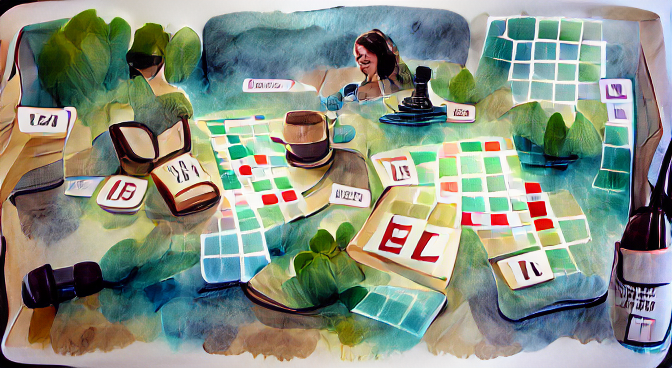 I recently download a dozen iOS games in the Lingo/Wordle genre. As I played each, my appreciation for the original Wordle grew. Here’s a look at the design decisions of the different implementations, and what we can learn from them.

The lexicon of words that can be guessed needs to be the right size, containing common words. With WhatWord there are too few words; within a few days of playing the application, I’m seeing repeats. With PuzzWord, there are too many rare words; I’ve had three mystery words in a row now that I had never heard of before (acerb, dicot, yugas, …) So much so that a subsequent release of PuzzWord provided definitions for the words when the game is over, and a later release lets you narrow the mystery words down to common words.

For those of you who want the mystery word to be something you don’t know, you’ll appreciate those games that make this a setting. Rare words were also a complaint with Word Game Hero, but they too solved it recently by adding a setting to restrict mystery words to popular words.

For most people, the vocabulary of the game should be asymmetrical – the app should recognize more words than it will use as guesses. In fact, this is a feature of the original Wordle implementation: it has a library of 2,315 mystery words but allows you to guess 12,972 words. Apparently, the creator made the game for his partner, and – after playing it a bit – she then suggested a shorter list of mystery words and narrowed the list down herself.

Clues seem like an area that can be improved. PuzzWord shows a letter highlighted multiple times – so if you guess with a word like SPEED it will highlight both E’s in your guess, even though the mystery word only has one E. Wordle only highlights the first E in this case. I feature I’d like – a blue letter, which means that it occurs more than once but not in this position. I always feel slightly cheated when the mystery word has repeat letters (which, to be fair, about 35% of five-letter words in English have).

One weakness of Wordle is that frequent players will tend to always start the puzzle using the same word. On easy mode, you can actually use a set pattern of three words that will get you 14 unique letters – making it pretty easy to guess the word from there. This rote opening is a weakness of the game, but only Lingo solves it. Lingo highlights the first letter of the word, giving you one fewer guess in exchange (five guesses, instead of six). I’d go one step further – show a random letter (any position from first to fifth). Because otherwise I would totally memorize 26 different words to start with, depending on starting letter (crazy, I know). So, yes, I’d like configuration settings for this.

Lingo has some features I don’t like, which date back to its origin as a television gameshow. Lingo has a time limit in which you must make a guess. Fair for playing Boggle or Scrabble with other people in real life, but not something I want in the app I’m playing. (Though I suppose this too could be a customizable setting.) Another feature I don’t like: guess a word not in its database and you instantly lose! The other apps give you a warning; the poorer implementations say “Not a word”; the better implementations say something like “Not on my word list.”

Most of the apps don’t track streaks, which are one of the keys to the ongoing success of Wordle. Streaks, as Duolingo has discovered, make apps habit-forming. PuzzWord and Word Game Hero both track streaks.

The limit of a word a day in the original also keeps you coming back – it reminds me how my paternal grandmother would always do a crossword in the morning. There’s a tradition of word games in the morning (see how the New York Times has expanded its word games beyond crosswords). But, of course, the third-party iOS apps I reviewed are specifically designed to answer the urge of wanting to do more than one a day. One, Klura, does offer a daily puzzle in addition to random puzzles on demand.

One benefit of Wordle’s word-a-day orientation is that the mystery words are unique. The list has been shuffled, rather than selected randomly. What’s the difference? Well, in Word Game Hero, I happened to get the same mystery word just a few games after first getting it; I had similar issues with WhatWord. That’s random, just not shuffled; it’s choosing a random word each time with no memory of the past words it has chosen. [Word Game Hero now tracks past mystery words and chooses from ones you haven’t seen.]

Finally, Word Game Hero’s Share feature is kinder to those who are colorblind than Wordle’s, showing different shapes for the different styles of guesses:

Wordle didn’t just take off do its innovative social-media strategy (the social-media posts were themselves a puzzle to work out), but due to its attention to detail and getting a lot of minor details right.

Here’s a quick summary of the dozen iPhone games I examined:

I thought about writing up detailed reviews, but these games were literally being updated during the week I was playing with them. Of these 12, I ended up playing PuzzWord and Word Game Hero the most.