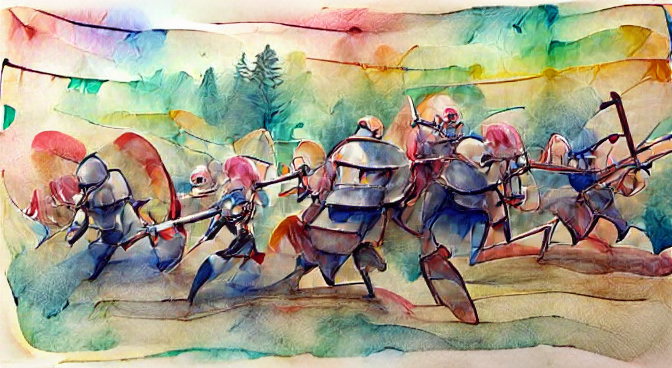 Some complain that PbtA games lack tactical moves and so combat has much less mechanical support than in traditional roleplaying games. This shouldn’t be a surprise since D&D grew out of wargames with miniatures and so naturally emphasized combat. Yet I personally find fights in a PbtA fantasy game to be much more exciting, dynamic, and cinematic than fights in 5e, for instance. But there are times I want additional mechanical support from the game for tactics.

One area where I don’t do a great job in the fiction is when enemies are wielding weapons with the reach tag. Weapons in many fantasy PbtAs, taking a cue from Dungeon World, use range tags like hand (e.g., dagger), close (e.g., sword), reach (e.g., halberd, spear), near (e.g., crossbow), and far (e.g., bow). The reach tag lets the opponent keep its enemies at bay. It’s also a pretty common tag for monsters. But in the heat of combat I sometimes forget that a halfling with a dagger is going to have to struggle to get into position to stab a frogling with a spear.

With the help of the DW+ Discord, I workshopped this move:

UP CLOSE AND PERSONAL

When you approach or leave melee with someone larger than you or who uses a weapon with reach or who is flanked by allies, roll +DEX: on a 10+, evade their attack altogether or take half the damage to create an opportunity for adjacent allies; on a 7-9, suffer half the damage.

Obviously such a move isn’t needed – Defy Danger or its equivalent will do. In fact, this is the least popular move in the Uncommon World configuration tool! But the trigger reminds me that this is something I want to enforce in play. And, yes, it’s the old attack of opportunity from D&D.

I’d encourage you to think about areas you want to improve on based on earlier battles you’ve experienced in a PbtA game and scour some of the hacks for moves that might work for you.

In the meantime, here’s my own compendium of a collection of Tactical Moves.

From my Uncommon World configuration tool, the most popular of these moves, selected by over half of participants, is Jeremy Sandberg’s Give Chase move:

When you pursue your quarry, roll and add…
+DEX to outrun or outmaneuver them
+CON to outlast them
+WIS to track them or seek them out

On a 10+, you corner your prey or catch them in the open; on a 7-9, you prey picks one:
• You’ve almost got them, there’s just one last obstacle in your way
• They’ve gone to ground; you know where they are but they’re hard to get at
• They wheel unexpectedly and attack.

And no discussion of PbtA combat would be complete without pointing to Jeremy’s article, Running Fights in Dungeon World and Stonetop.

FVTALK: Runes from the Roman Alphabet