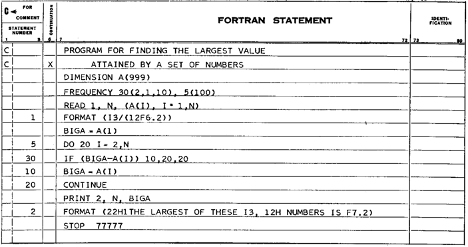 I stumbled across the line number article on Wikipedia, and let’s just say it lacked a historical perspective on where line numbers in programming languages came from and how they were used. I ended up writing a history section (adapting some from other Wikipedia articles). I have fond memories of reading my dad’s FORTRAN IV programming manual when I was a kid and later learning about JOSS in History of Programming Languages. (And you have no idea how hard it was for me to not type the name of every programming language in the title of this blog post in UPPERCASE.)

In Fortran, as first specified in 1956, line numbers were used to define input/output patterns, to specify statements to be repeated, and for conditional branching. For example:[3]

Like assembler language before it, Fortran did not assume every line needed a label (line number, in this case). Only statements referenced elsewhere required a line number:

Line numbers could also be assigned to fixed-point variables (e.g., ASSIGN i TO n) for referencing in subsequent assigned GO TO statements (e.g., GO TO n,(n1,n2,…nm)).

In COBOL, line numbers were specified in the first six characters (the sequence number area) of punched cards. This was originally used for facilitating mechanical card sorting to assure intended program code sequence after manual handling. The line numbers were actually ignored by the compiler.

In 1963, JOSS made line numbers mandatory for every statement in a program and ordered lines in sequential order. JOSS introduced the idea of a single command line editor that worked both as an interactive language and a program editor. Commands that were typed without a line number were executed immediately, in what JOSS referred to as “direct mode”. If the same line was prefixed with a line number, it was instead copied into the program code storage area, which JOSS called “indirect mode”.

Unlike FORTRAN before it or BASIC after it, JOSS required line numbers to be fixed-point numbers consisting of a pair of two-digit integers separated by a period (e.g., 1.1). The portion of the line number to the left of the period is known as the “page” or “part”, while the portion to the right is known as the “line”; for example, the line number 10.12 refers to page 10, line 12. Branches can target either a page or a line within a page. When the later format is used, the combined page and line is known as a “step”.

Pages are used to define subroutines, which return when the next line is on a different page. For instance, if a subroutine for calculating the square root of a number is in page 3, one might have three lines of code 3.1, 3.2 and 3.3, and it would be called using Do part 3. The code would return to the statement after the Do when it reaches the next line on a different page, for instance, 4.1. There is no need for the equivalent of a RETURN at the end, although if an early return is required, Done accomplishes this. Example:

Introduced in 1964, Dartmouth BASIC adopted mandatory line numbers, as in JOSS, but made them integers, as in FORTRAN. As defined initially, BASIC only used line numbers for GOTO and GOSUB (go to subroutine, then return). Some Tiny BASIC implementations supported numeric expressions instead of constants, while switch statements were present in different dialects (ON GOTO; ON GOSUB; ON ERROR GOTO).

Line numbers were rarely used elsewhere. One exception was allowing the pointer used by READ (which iterated through DATA statements) to be set to a specific line number using RESTORE.

In the first editions of Dartmouth BASIC, THEN could only be followed by a line number (for an implied GOTO), not – as in later implementations – by a statement.

The Dialects of Tiny BASIC