Prepping with the End of the Session in Mind 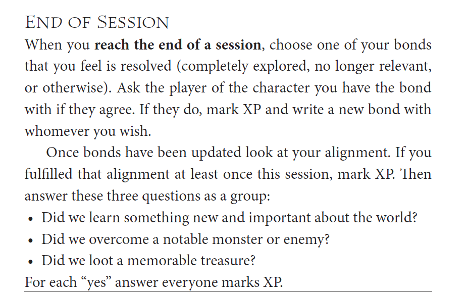 When preparing to run a PbtA (Powered by the Apocalypse) TTRPG, keep in mind how experience is gained. Many PbtA games have an End of Session move that awards experience points. Make sure you’re giving players chances during the session that align with this move!

Here is the End of Session move in Dungeon World:

When you reach the end of a session, choose one of your bonds that you feel is resolved (completely explored, no longer relevant, or otherwise). Ask the player of the character you have the bond with if they agree. If they do, mark XP and write a new bond with whomever you wish.

Once bonds have been updated look at your alignment. If you fulfilled that alignment at least once this session, mark XP. Then answer these three questions as a group:

• Did we overcome a notable monster or enemy?

• Did we loot a memorable treasure?

For each “yes” answer everyone marks XP.

After character development (bonds and alignment), Dungeon World is primarily about exploration, monsters (who can be overcome in other ways besides combat), and loot. When I run Dungeon World, I too often skimp on providing good loot, so that’s something I need to plan for better.

And here is the corresponding move in Stonetop:

When you reach the end of a session, give an example of how you fulfilled the requirement of your drive. If everyone agrees, mark XP.

Next, describe how your opinion of or relationship with another character (PC or NPC) has changed this session. If everyone agrees, mark XP.

Finally, answer these questions as a group:

• Did we learn something about the wider world or its history?

• Did we overcome a threat to Stonetop or the greater region?

• Did we improve our standing or influence with our neighbors?

• Did we make some lasting improvement to Stonetop, or tangible progress towards doing so?

For each “yes,” everyone marks XP.

As the GM when playing Stonetop, I need to make sure there are threats to the region (I sometimes let myself get sidetracked into having it be more of a player-driven sandbox). My players are good about setting goals for improving Stonetop (increasing the fertility of the fields, building a windmill), and I typically simply need to provide them multiple paths towards achieving the upgrade they are pursuing.

The Stonetop alternatives to alignment and bonds are so nice that I’ve switched them out in my Dungeon World campaigns.

From Monster of the Week:

At the end of each session, the Keeper [GM] will ask the following questions:

• Did we conclude the current mystery?

• Did we save someone from certain death (or worse)?

• Did we learn something new and important about one of the hunters?

It’s not that Monster of the Week is more stingy on awarding experience, just that it uses different math (awarding an improvement for every 5 experience points instead of every current level + 7 in Dungeon World).

Weirdly given the name of the game, there’s no achievement that calls out monsters by name. (I haven’t played this system yet.)

From Blades in the Dark:

• Your playbook-specific xp trigger. For example “Address a challenge with violence or coercion.” To “address a challenge,” your character should attempt to overcome a tough obstacle or threat. It doesn’t matter if the action is successful or not. You get xp either way.

• You expressed your beliefs, drives, heritage, or background. Your character’s beliefs and drives are yours to define, session to session. Feel free to tell the group about them when you mark xp.

• You struggled with issues from your vice or traumas. Mark xp for this if your vice tempted you to some bad action or if a trauma condition caused you trouble. Simply indulging your vice doesn’t count as struggling with it (unless you overindulge).

• You may mark end-of-session xp on any xp tracks you want (any attribute or your playbook xp track).

If you’re finding that you’re regularly not providing experience along one of the dimensions the end-of-session move invokes, talk with your players. In my two Dungeon World campaigns, we’ve tweaked the move:

When you reach the end of a session..

Describe how your opinion of or relationship with another character (PC or NPC) has changed. If no one objects, mark XP.

Give an example of how you’ve met the requirement of one of your Drives. If no one objects, mark XP.

Then answer these three questions as a group:

• Did we overcome a notable challenge?

• Did we gain a significant treasure or boon?

For each “yes” answer, everyone marks XP.

Award a star to someone for a great moment of gameplay.

Make a wish for what you’d like to see in a future session.

Licensed under Creative Commons Attribution-ShareAlike 3.0 United States (CC BY-SA 3.0 US) by J. Alan Henning, 2021. Based on the “Make Camp” move from Homebrew World by Jeremy Strandberg, 2019, which is based on the “End of Session” move by Sage LaTorra and Adam Koebel, 2012, from Dungeon World.

In your Session 0, ask your players if they want to swap out one of the three questions with a different focus for the campaign.

You’ll serve the end of session best if you start your prep with it in mind.