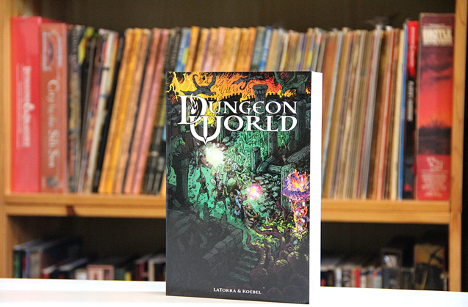 My normal prep uses the Lazy Dungeon Master Adventure Prep, though sometimes I turn to the 7-3-1 technique or what I call Monty Hall Prep. When my players in a Dungeon World campaign told me (in Stars & Wishes) that they planned for their PCs to return for a third time to a tunnel to search for the McGuffin, I decided to mix it up. I needed to think differently about this setting, which they’d already visited multiple times. And I’d been wanting to get better at thinking through and improvising moves, so on my lunch break I made a list of all the moves. Then I thought of an example for each for this tunnel they would be exploring again:

I got all but 3 done over lunch, then filled in the others later in the day as they occurred to me. I grabbed a map from the Neutral Party Patreon for use on Roll 20.

This is where I’m supposed to tell you it worked great.

However, one of the players decided that rather than go back to the tunnel he wanted to confront the cyclops instead, so off they went to do that. Bummer. But fortunately I had already had in my head what was in the cyclops’ cave so that session went off well (with some great gameplay from failed rolls). But then they ended the session saying they’d try the tunnel again next time.

So the next session I got to use this prep, which I hadn’t touched in the prior week, other than deleting the two moves relating to the cyclops.

And I felt like it worked like a charm. I used seven of the moves and felt like I did a better job of improvising other moves. For instance, when the druid cast Elemental Mastery for the first time, and failed, I used “separate them” – she caused a cave-in that separated one player from the rest. Had I not just prepped an example move of each type, I might have just had rockfall damage her; so this helped me align the fiction better with the moves.

I don’t look at the prepped moves I didn’t use as wasted; they were like a training or visualization technique for success. I’m not going to use this method for every session, as I typically run a sandbox where players have a lot of agency to go in very unanticipated directions. I do plan on turning to it again when I feel like I could use a review of all the moves and an upcoming session will be more constrained — I have a climatic battle coming in a few weeks, which I think it would be great for.

And I’ll definitely use the technique when I’m prepping for a first session using a new PbtA system (I’ve got Monster of the Week in my sights).

If you’ve got an upcoming session where you could use some inspiration and you have a good sense for the environment your PCs will be in, I encourage you to try it out.

A History of Postal Code Notation in the Sh[…]

Prepping with the End of the Session in Min[…]