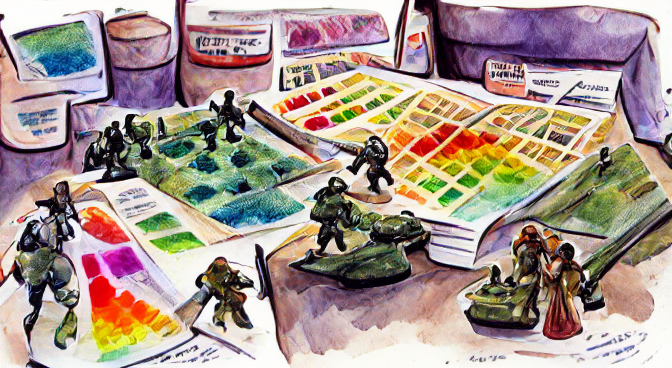 Greg Costikyan shares a great example of the market-research sophistication of wargame development at its height in his elegy, “A Farewell to Hexes”:

Perhaps Strategy & Tactics’ most important innovation, however, was its feedback system. Using primitive Burroughs, later IBM, minicomputers, Dunnigan put together a highly sophisticated system to obtain marketing information from his customers. In every issue of the magazine, there was a response card, with 96 numbered blanks. At the back of the magazine were a series of questions, to which a reader could respond by entering a number between 0 and 9 on the blanks of the card. Some questions provided marketing data, e.g., average age of the readership; some were used to provide competitive rankings of SPI’s and other publishers’ products, charts that S&T’s readers pored over when deciding what game to buy next. And some were used to ask the readers what kinds of games they’d like to see. Indeed, every issue provided brief write-ups of game ideas, and SPI would design the games which received the highest ratings.

[The real question, of course, is: why hasn’t this been imitated? In the early 70s, SPI had to hire keypunchers to sit there by the hour, entering this data, then crunch the numbers hour by hour using expensive computers and expensive custom software. Today, reproducing SPI’s feedback capabilities would be trivial, using OCR technology, flatfile database software, and cheap PC clones. And yet every company in the field continues to publish by guess and by God….]

While I couldn’t find an SPI survey, Michael Eckenfels shares an example of the registration card and survey questions from Avalon Hill for Raid on St Nazaire:

Before Kickstarter, GMT Games survived the severe retraction of the wargame industry with its P500 preorder system. Kickstarter of course has made it easier to determine how large a print-run to fund (if any), with its system of crowdfunding.

On the RPG side, an underappreciated aspect of 5e’s success it that it was beta-tested with over 120,000 registered playtesters. Wizards of the Coast had a lot of feedback they could integrate and respond to.

Here’s a roundup of some of my past posts on market research and the game industry:

Illustration credit: Copyright 2021 by Pixray. Permission granted for non-commercial use.

BASIC in Your Browser, Its History, and Gam[…]