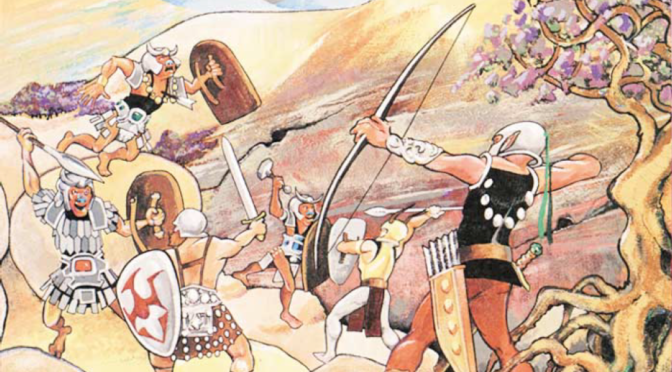 As I’ve written elsewhere, when I started my current homebrew O5R campaign, I generated a 10×10 hex map using Hex Describe. Even though it is powered by nearly 2,000 tables (!), I found myself missing the cast of characters that populate a town. I came up with a design goal of, within a single page, emulating the keep from The Keep on the Borderlands (buy it!) as a useful starting location for the adventurers, but adding more elements of intrigue. Since Hex Describe is open source, and you can append your own tables to it, I did so and shared my tables with Alex Schroeder and Ktrey Parker. Ktrey suggested I add more professions; Alex suggested it could be used for more than just one town, but if so it would need more options and more variability.

Here’s example output from what we came up with.

This is Selwick, a town of 200 humans (HD 1 AC 8 1d6 F1 MV 12 ML 7 XP 100). The wooden houses are protected by a large keep, a wooden palisade and the river. The outer bailey of the keep houses the richest tradespeople of the land, under the rule of Duke Félix the Lucky Khan. The inner bailey houses the castellan and the guard. Entering the outer bailey is by paying 1sp per person. These tradespeople work there:

The inner bailey is open to the select few and houses these noteworthy personages:

The corporal of the watch Alisha.

The local secret society Perfect Disciples of the Archaic Victory is being infiltrated. It is led by the wizard Gentjana📷(level 3). The spells known are based on The Book of Songs by Xoralfona the Wordsmith: 1. empathy, calm, 2. mind blast. They believe that the ruling class has been taken over by vampires. They prepare for the big fight by studying ancient books and training with silver daggers.

The Fellowship of Pale Fortune Tellers have been plotting to overthrow them, led by the wizard Diell📷 (level 5). The spells known are based on The Book of the Warp by Korokoro the Mad: 1. recoil, mishap, 2. ooze, plague touch, 3. warp mind. A potion of strength (deep red, smelling like tree resin, 20min, strength 18). To believe in the current order of things is what servants are trained to do. They believe that another world is possible.

Yet another secret society waits in the wings.

And, of course, this is built into the full hexcrawl generator, if you select Alex Schroeder’s set of random tables. For my hexcrawl, I actually ran all three sets of tables and combined them. I ran the same map through the generators from Alex Schroeder, Peter Seckler (a fork of Alex’s supporting different terrain types), and Matt Strom. Then I copied and pasted each together. Tedious and not something I’d do again but Alex’s doesn’t cover all terrain types. In retrospect, I’d start with Alex’s only and then cherrypick from the other two documents rather than combine them all to start with.

The specific ruleset that Hex Describe uses is Alex Schroeder’s heartbreaker: “Halberds & Helmets is the name of my Players Handbook for old school D&D. It takes its inspiration from B/X D&D (1981) via Labyrinth Lord and incorporates many of the various rules and ideas I tag Old School.” This is mostly compatible with B/X but Halberds & Helmets (and therefore Hex Describe) uses its own sets of spells.

You can take the generator for a spin here: Hex Describe Town Rule (about half the towns have the keep with personages).

Two Hours of D&D Play from One Sentence!