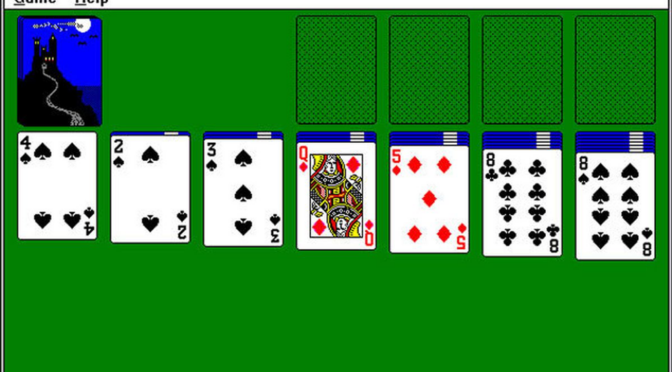 My 14-year old son asked me to teach him to play Solitaire last weekend.

This made me question my life choices: how had we never taught him Solitaire?! I can remember playing Simultaneous Solitaire all the time with my maternal grandmother and brother and sister before I was even ten.

So we got out three decks and each played traditional Solitaire, my wife and I guiding him along.

I even queued up a soundtrack (“Solitaire” by Suzanne Vega).

I explained to my son that when Windows 3.0 came out it was the first GUI most people had seen, and Microsoft Solitaire was used to teach people about drag and drop.

Karen remembered her Magic Link PDA from Sony (running General Magic), which would cheer and clap when she won.

I realized that we’ve played a lot of cards with him, but they’ve all been dedicated-deck card games: Fluxx, Bang!, 7 Wonders, Innovation, Race for the Galaxy, Civscape, and Melee in the Mines. When I was a kid, we played dozens of different card games with a regular deck: Simultaneous Solitaire, Rummy, 99, Blackjack, a bunch of Poker variants. The only card game with its own deck that we played was Uno.

Anyway, he played Solitaire twice and lost both times.

I finally talked him into Simultaneous Solitaire. Simultaneous play means the game is no longer deterministic, no longer Candy Land for adults. The relative speed of the players changes the course of the game, as the two players race to play on the eight foundation piles. It’s a curious mix of cooperative vs. competitive – mainly competitive, as you want to get the most cards in the foundation piles, but there is such a sense of completion that it becomes cooperative when one person is stuck and you help them out, pointing out moves they missed. (Fun fact, Simultaneous Solitaire is known as Zankpatiencen, quarrel patiences, in German.)

Probably more popular is Nerts, a variant that uses 4 piles in the tableau instead of 7, with the addition of one face-up pile of 13 crads (the Nerts pile) [Nerts rules]. Dutch Blitz is in turn a variant of Nerts, but with a dedicated deck!