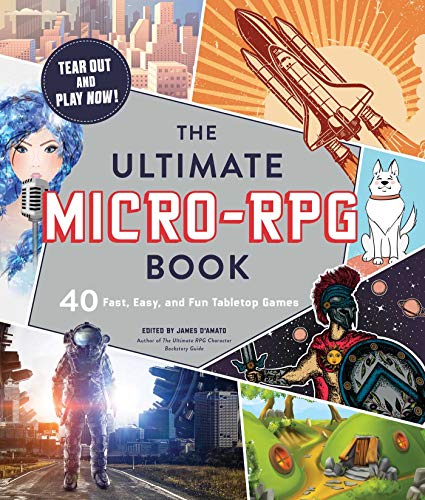 The very first role-playing game was the original Dungeons & Dragons boxed set, with its three 36- to 40-page booklets (Men & Magic, Monsters & Treasure, The Underworld & Wilderness Adventures) presenting the idea that RPGs should go big. Of course, the second RPG was Tunnels & Trolls, which fit everything into one 42-page booklet.

Still the belief has been that RPGs need to go big, with the average length of main books about 250,000 words.

So it may surprise you to learn that RPGs can be less than 0.1% that size. Like 200 words:

A 200-word limit encourages creativity and demands the very best of your editing and writing abilities. While making a game in 200 words can be difficult, it’s less of a daunting commitment than editing and proofing 285 pages of rules, complete with art and layout. Conceiving, designing, and publishing a 200-word game is a great first step toward completing larger game design projects.

For one of last year’s winners, check out “Hey, this song reminds me of you.”

If 200-word games are the sonnets of RPG systems, then one-page RPGs are the nanofiction of the genre. Some are actually one page, like John Harper’s Lasers & Feelings, one of the most influential one-pagers (widely reskinned and hacked). One of the oldest one-page RPGs I’ve found, from 2009, is Nicolas Dessaux’s Searchers of the Unknown, an elegant hack of OD&D: “A typical old-school D&D module stats list for a monster looks like this: (AC6, MV9’, HD 1, hp 4, #AT1, D1-10 by halberd). The idea is that, if it’s enough for monsters, it should be enough for PCs too.”

Other one-page RPGs are one page but double-sided, like Grant Howitt’s Honey Heist (Grant has three volumes of one-page RPGs). And the One-Page RPG Systems subreddit allows up to three pages.

Micro-RPGs are 4 or more pages but typically under 20: the short stories of RPG systems. The earliest micro-RPG is probably the game system from the first Fighting Fantasy gamebook, The Warlock of Firetop Mountain. (While Buffalo Castle in 1975 is the first gamebook, it required the Tunnel & Trolls rules.) With Fighting Fantasy’s attributes/stats of Skill, Stamina, and Luck (each of which could go up and down), this was the first three-attribute system, an aspect widely copied in other micro-RPGs.

The rules may be just one page, with the other pages given to character sheets and companion tables of names, equipment, spells, monsters, and spanning the other pages. One of the most well-known creators of micro-RPGs is Ben Milton, for Maze Rats and Knave, which are both OSR systems without character classes. Knave has a vibrant community around it, with lots of supplements and hacks. Another popular OSR micro-RPG is The GLOG (The Goblin’s Laws of Gaming), which is open source and widely hacked in the “GLOGosphere“.

Since they are so concise, micro-rpgs have inspired lots of variations and hacks. The Searchers of the Unknown RPG Collection has the original version along with 40 hacks and reskins.

The original Microlite20 was “a trimmed-down, subminiature version of the Primary Fantasy SRD rules (see license for more info) that has been designed to be quick and easy to play” in just 3 pages, with 1 page taken up by the Open Gaming License. Somehow the system has grown and morphed into hundreds of variants, many newly compiled in The Microlite20 RPG Collection: 2020 Collection, which has more pages than most of the other micro-RPGs discussed have words (2,768 pages)! Weighing in at 1.4 million words in total, it’s probably time for a Micro-Microlite20!