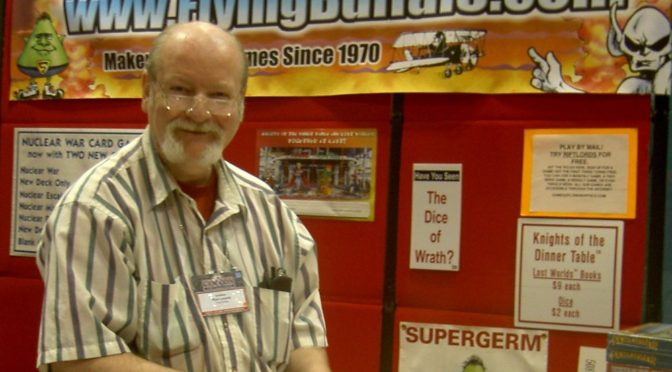 When I learnt Rick Loomis passed away, I pulled out my copy of his Buffalo Castle, the first solitaire RPG adventure. I played a lot more solitaire RPGs than in-person, and I have Rick to thank for that. (I met Rick once, at a convention, of course.) You can play along with me:

Play along! I created a character. Key thing to note when you do: “Constitution” is what you will probably think of as health or hp. “Hit points” in T&T are for each round of combat: “The hit point total is the sum of a characters [sic] dice roll plus whatever adds may be coming to him.”

Yeah, so this was like a 1970s arcade game. You’d just expect to die a lot and have to puzzle your way through. This reminds me of a BASIC or FORTRAN IV program, which is not surprising as Rick claimed to be the first person to buy a computer just to play games!

I eventually came up with a strategy, bought different weapons, and won!

So celebrate the life of Rick Loomis by playing this pioneering game and returning, momentarily, to what gaming was like in 1976.