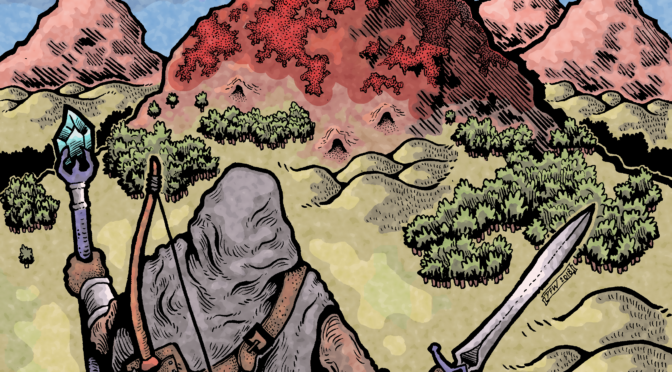 Last week I wrote about micro-RPGs. This week we take a look at one of my own such systems, for the gamebook Hero’s Arc: Under the Blood-Red Mountain, winner of Best Dungeon Crawl in the 2018 Solitaire Print-and-Play Contest.

You are the hero of this story, making decisions that will shape your fortunes. Unlike a conventional book, you don’t read this sequentially – most numbered sections will provide you with a choice to make: depending on your choice, you will continue reading a different section.

To play, you will need three six-sided dice (3d6), each visually distinguishable from the other (different color and/or size). Pick a color to represent strength (e.g., red), dexterity (e.g., green or white), and wisdom (e.g., blue or black).

A trait check requires you to roll the three dice and total them. If you roll a number equal to or below the specified trait, you pass, otherwise you fail. For instance, melee weapons require you to perform a strength check, ranged weapons like longbows a dexterity check, and magic weapons like staffs a wisdom check. These checks aren’t just for combat: you may need to roll a strength check to break open a door, a dexterity check to jump a chasm, or a wisdom check to perceive something hidden in your surroundings. So, if you have strength of 10, you will need to roll a 10 or under to pass a strength check.

In addition, sometimes you may be asked to take a health check. These will never kill you, but they will weaken you. Roll the three dice. If you roll your current hit points or less, then take one die (specified in the text) as damage. Note that health checks are opposite of trait checks: high rolls avoid harm.

For melee combat, the combatant with the highest dexterity attacks first (you win ties). To attack, roll the three dice. Players hit on the trait check required by their weapon (e.g., strength for swords, dexterity for bows, and wisdom for staffs); for monsters, the trait is specified with an asterisk (*). In case of a hit, you resolve damage according to your weapon, looking at the dice already rolled. If you have no weapon, or have only a dagger, the damage is the lowest die rolled; monsters score damage for the trait they checked, unless otherwise specified. If you are using a ranged weapon, the damage is the dexterity die; etc. If the monster exactly rolled their trait level, they get bonus damage, according to their weapon or innate ability.

If the monster missed, and has been wounded, and rolled its panic level or above, then it flees. The player may make one last ranged or spell attack, if they can, to try to kill the creature before it flees.

If your health drops to zero or less, you are almost unconscious and near death. Further instructions will typically be provided on another page.

For some items, you will need to record the runes inscribed on the item. While you don’t know the words in the many different languages of land, you do recognize the most common runes, the III of the fishfolk, the TLVX of the kobolds, the ZYNKHAF of the goblins, and the FVTHALKEM of the dwarves (which the gnomes call FVTHALKEMIZYNX). For instance, if you discover a sword with the runes XVT, record that sequence; it may be useful later on.