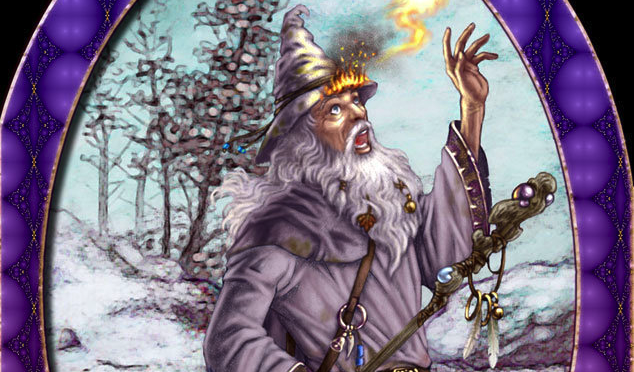 Here’s another card-game design challenge and a case study for you:

Design a game that can be played with a regular deck of cards. You don’t need to use all the cards in the deck. You can use each suit as a separate type of card, if you want to limit yourself to four types of cards. For instance, you could use the numbers to differentiate levels, so if hearts represent health, you can have 1 (Ace) through 10 (including face cards) represent how much health is involved, setting aside the Jack, Queen, and King of Hearts.

You are engaged in a duel of wizards. Can you cast the right combination of spells that will defeat your rivals?

The last player to lose a game goes first.

On a player’s turn, they may conduct one of the following attacks, saying the magic spell if they wish:

The current player may then draw 1, 2 or 3 cards, so that they have 3 cards in their hand.

A targeted rival must respond to an attack. They must either play a diamond (♦) counterspell from their hand to ward off the attack (“Diffugio!”), or discard a heart (♥) healing spell from in front of them (“Curatus!”). If it is their last healing spell, they lose! Play continues until only 1 wizard remains standing.

The inspiration for Wizardly Duel was to have a better alternative to the classic card game of War. In War, you play a card from your deck and, if it is higher than your opponent’s card, capture their card and add it to your deck. This is a great way to teach greater than, equal or less than. It is a bad game, though, as you do not have any decisions to make. Just flip the top card and do the comparison. Plus the game takes forever, though I have fond memories of playing it with my dad when I was 8 years old. In fact, BoardGameGeek.com ranks War as the fifth worst game in history, ranking 15,697 games as better than it!

In contrast, one of our family’s favorite card games about battle is called Bang!, which is an award-winning card game designed by Emiliano Sciarra. You are a cowboy in a Wild West shootout with a specific goal (shoot the sheriff, save the sheriff, shoot the outlaws, be the last one standing, etc.). The core of the game involves playing a card called Bang! (from which the game gets its name) that represents a gunshot, then trying to fend off that gunshot with various other cards. Wizardly Duel was conceived as a version of Bang! played with a regular deck of cards and just 4 types of cards.

If you know the game of Bang!, then you may recognize that the healing spells are like the three bullets (cardboard cutouts) representing your cowboy’s life. The counterspell card is the Missed! card when played after being attacked, and the Cat Balou or Mistress card when played as an attack. The magic-missile card is the Bang! card unmodified by any effects; the fireball card is the Bang! card on repeat (typically through use of a Volcanic, when playing as Willy the Kid, or – sort of – when using the Duel card).

Now, were this a game being prepared for publication, it would be wrong to base it off Bang! so closely, and in fact Bang! has been cloned and its publisher has sued the company cloning it. But we’re just using Bang! as an example for a home-brew game, and for better understanding game design. (If you don’t own Bang!, check it out.)

When considering using another game as inspiration, I like to look at its list of cards. Bang! has these 80 cards (not counting roles and characters):

The good news about this analysis was that a lot of the cards were attack cards, as they would be in Wizardly Duel. And there were almost twice as many Bang! cards as Missed cards, while Wizardly Duel has exactly twice as many damage spells as counterspells.

In Bang!, as in many card games, you draw cards to your hand, then decide what to play. I absolutely hate this mechanic, since it slows a game down. (In the language of game design, a game mechanic is a type or category of rules. More on this later.) The player has to read the cards, then decide what to do. Instead, I prefer to have a player draw their cards at the end of their turn. They can look at them and decide what to do while the other players are taking their turn. This makes the game go faster in actual elapsed time and be perceived as faster too, since the player now has something to do when it is not their turn.

The first version of the game my son and I kept all the hearts in the deck but dealt each player 3 heart cards to start their hand and then 4 other cards. Unfortunately, it meant the game would go on a long time. So halfway through the deck, we decided to change the rules. We removed the hearts, and the game went much faster. We started over. Sometimes, when playtesting, especially early in the design process, be willing to stop and change the rules and try again.

The second playtest, the first complete play-through until one of us won, we felt the game worked well but could be improved. At this stage, we kept the three heart cards in our hand. This made for a big hand, so we decided the three heart healing-spell cards would be played up in front of us instead. For a game with more than two players, it will make it easy to decide who is winning. We also decided to shrink the hand size to 3 cards.

The third playtest of the game we decided to mix it up and have the clubs allow you to draw cards, and be only way to draw cards. But I quickly ran into a problem. I didn’t have any clubs! We stopped that playtest after a few rounds.

It still felt wrong not to have different powers for the two types of black cards, so I decided that clubs would be the only spell that you could play multiple times during an attack. The fourth playtest went great, with one problem. I had a hand of all diamond counterspells, which at that time could only be used in response to an attack. So, on the fly, we changed the rules so that you could play counterspells as your attack, seizing a card.

With the rules seeming almost final, the next step was to play the gave some more and make sure that we still enjoyed it. My son started shouting spells from the Harry Potter books!

After that, we had to conduct what is called a blind playtest. In a blind playtest, you give someone the rules but don’t teach them how to play. Then you listen to their feedback and find out what was unclear.

Here’s how the game changed as we playtested it:

Now that’s for a game with only four types of cards. Imagine how much experimentation and replay is needed for a more complicated game.

And that’s why this blog is set up as it is, with simple design challenges to get you started on game design.