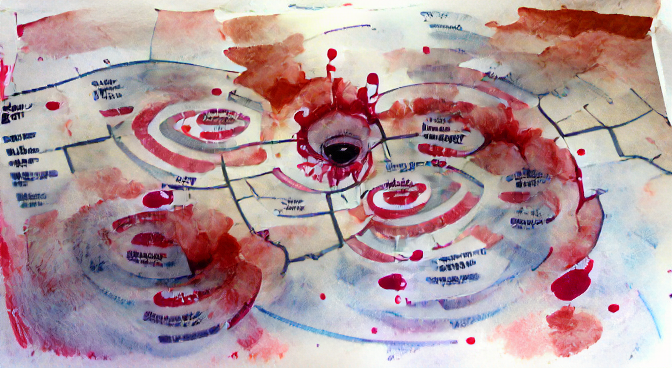 One of the great bits of tech from Apocalypse World 2e is the threat map, which provides a concise summary of campaign prep. You can adapt it for other systems as well, if your play centers on a holding or home base. Here’s an example from last year for my Stonetop campaign:

List the players’ characters in the center circle. As you name NPCs, place them on the map around the PCs, according to what direction and how far away they are.

For my first homebrew campaign, I had created a hexmap using Hex Describe and then updated it as a living document as a regular part of my campaign prep. That would not work as well for a game like Stonetop, which – like Apocalypse World – centers the PCs’ adventures around their home.

The threat map provides an overview of threats, which AW2 documents using half sheets that summarize the treat. These forms list the type of threat, its impulse (drive), its description , its supporting cast (if any), what is at stake, and may even include a custom move or countdown clock. I’m not using this at the moment’ my notes about specific threats are less structured and more of a grab bag of things I might find useful.

The other key part of the threat map, though, is the “I Wonder” section. This section gives you permission to ask yourself questions about the campaign that you don’t yet have the answer for. From the book:

Leave yourself things to wonder about. You’ll know it when it happens. A player will say something and you’ll be like, hey wait, there are fish swimming down there. So you’ll ask, and the player will answer, but you’ll be like …I don’t think that’s the fish I’m after. I think the fish I’m after is still down there, deeper than I thought, and bigger than I thought too.

Sometimes it’ll happen with one of your own NPCs. You’ll be talking along, and you’ll suddenly be like, hold on, this guy Scrimp is … weaselly… but he isn’t afraid of Marie at all. How can that be?

You don’t need an explanation right now! … Nod to yourself and back away, fixing the spot in your memory. (Which means to note it down on your threat map under “I wonder.”)

Threats and Threat Maps in Stonetop

I encountered threat maps first in AW2 and then applied them independently to Stonetop. But Jeremy Strandberg, author of Stonetop, had already added threats (but not threat maps) to the game years before. Writing on the DW+ Discord in 2019, he wrote:

The short version on how I got to Threats for Stonetop instead of Fronts per DW is: I just cribbed it from AW2e. The architecture of “fronts” (where each adventure front has multiple dangers [each with grim portents/dooms], a cast of characters, stakes questions, and custom moves) makes the most sense in a game where PCs wander from adventure to adventure and occasionally leave lose threads around. But in Stonetop, the PCs are centered in a home base and threats rear up around them. The AW2e structure of just categorizing everything that could come back to cause problems later as “a threat” and maaybe giving it a countdown and maaybe writing stakes questions and so forth, and then plotting those threats on a map showing their relative position to the PCs… that just makes more sense for Stonetop.

I sort of combined the Danger types from DW and the Threat Types from AW2e, and kept the idea of “MC moves by threat type” but I always found the specific sub-types for Dangers in DW limiting rather than inspiring (and feared that the same would happen with the AW2e-style threat sub-types). So I just went with examples and their instincts, rather than making a supposedly exhaustive list.

As for how mandatory I think they are… I think they’re super, super helpful for Stonetop. If nothing else, keeping track of the threats that have been established makes life a lot (a LOT) easier when you get to a Seasons Change roll and it results in a threat growing worse, or the PCs getting valuable insight into a threat, or they get a “threats abound” result. And they’re also really useful for handling complications and misses on homefront moves. Like, if the PCs have the village Pull Together and get a 7-9, and pick an unforeseen requirement, look at your threats and have one show up to cause trouble. Or when the PCs are investigating strange goings-on in the village itself, a miss can lead you to directly advancing one of the grim portents and BOOM, the Widow Eira (who all the farmers listen to) gets murdered in her sleep by the fae that’s been causing trouble. Ooor… a 6- or a hard choice on a 7-9 can result in a new homefront threat, which left unchecked can result in increasingly bad problems.

And here’s the current Stonetop draft’s discussion of “I wonder”:

Keep a running list of open questions—things that you wonder about, but either…

… you don’t know how to answer yet, or

… you want to leave unanswered for now and see it get answered through play.

“I wonder… what did happen to the Forest Folk? What was that thing Vahid faced when he got the Mindgem? What exactly is making the crinwin so bold?”

Refer to these questions as you prepare adventures. Use the list to help identify the adventure’s central opportunity or threat, or to help write the setup questions that you’ll ask the characters.

Update these questions between sessions. If a question has been answered, remove it.

If a new question occurs to you, add it to the list.

You can find an earlier discussion of Stonetop threats on the G+ Archives.

I also integrate feedback from Stars & Wishes into my “I wonder” list.

I might even adapt the threat map to my next hexcrawl, using it to track rumors (“notional” threats) and other dangers, centered on wherever the PCs have selected as a base. I hope you’ll find threat maps as useful for campaign prep as I have.

And I encourage you to buy both Apocalypse World and Stonetop – both are packed full of advice and good ideas, which you’ll find useful even if you don’t end up running these specific systems.

1973 Implementation of Wordle was Published[…]