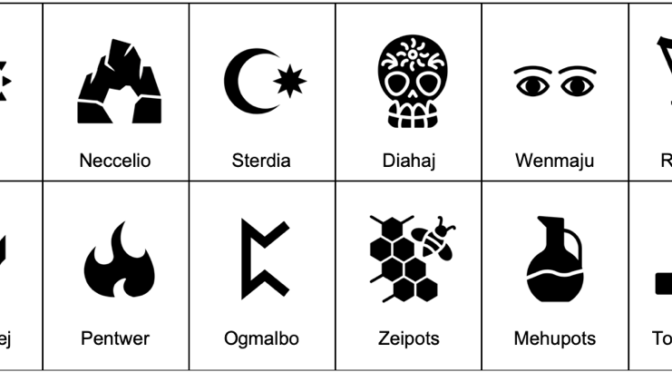 The general advice for DMs building their own campaign worlds is to recognize that most of world creation won’t end up being experienced by the players. While you can go full Tolkien if you wish (to obey your own muse), you’re typically better off creating simple systems and then using fractal design to zoom in on those parts that players show an interest in.

For my Hexedland campaign, rather than write The Silmarillion, I developed a one-page pantheon, where the description of each god shared the major myth associated with that god. Read together, this provides a summary of the mythos. What follows is what I provided players at Session Zero:

Humans believe in all 12 gods, but most have two gods they consider patrons. They wear an upper arm ring with a symbol of their favored god and a finger ring with the symbol of their second god. They do not need to pick a god that exactly matches their alignment.

Common beliefs no matter which gods a player favors:

The twelve gods often contest one another in mortal affairs. Other, more idiosyncratic gods are worshipped elsewhere.

The archetypes for the gods came from The Hero and the Outlaw. The icons were all sourced from The Noun Project (for which I have an annual license).

Update: For a generic list of gods, see Reskinnable Pantheon for a Module.

Use Text Mapper to Create Random Maps and H[…]