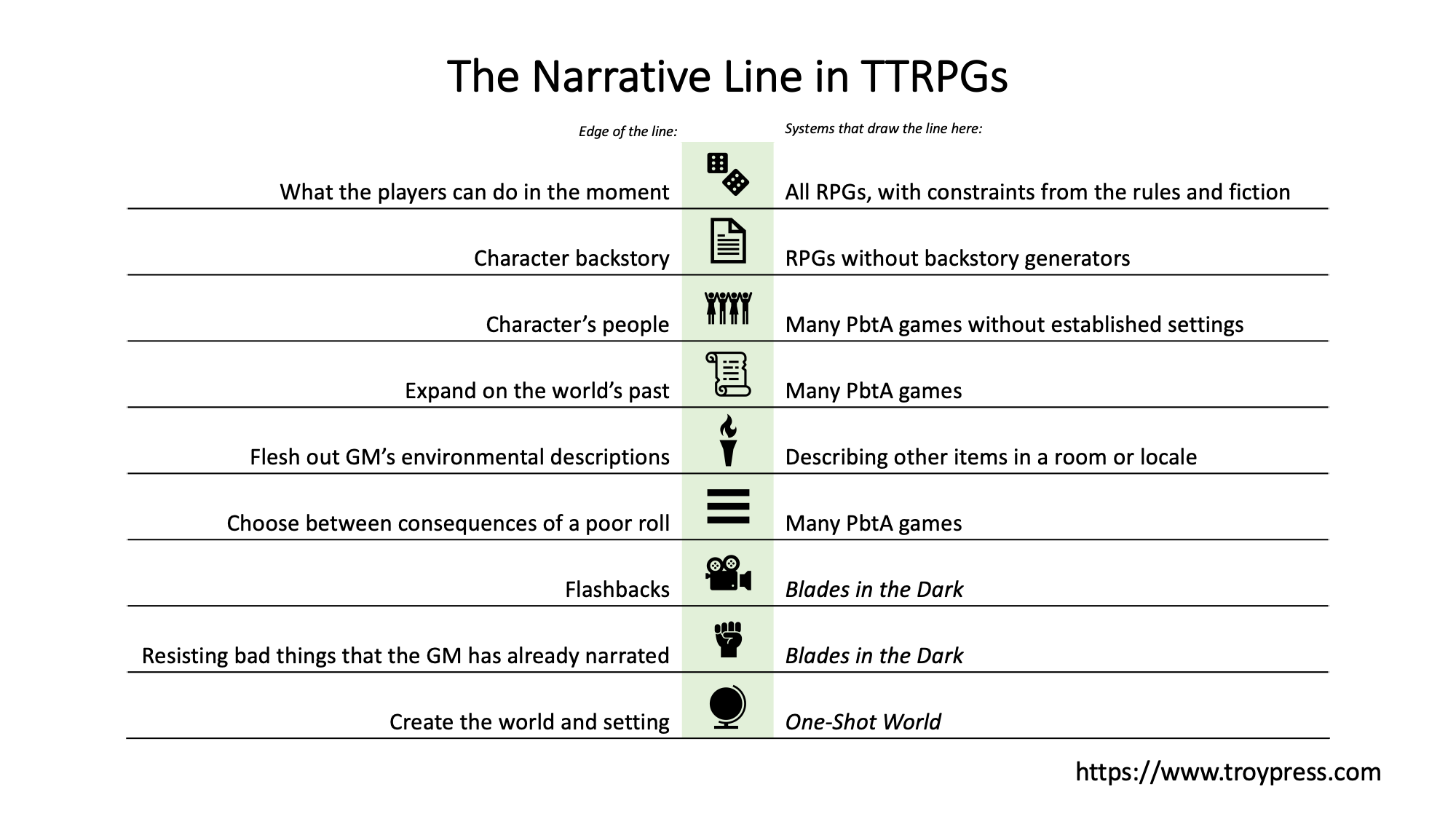 Of course, even some DMs in 5e shift the Line a little – “You killed it! Describe your final blow and its death throes!”

On the other extreme, take One Shot World by Yochai Gal. The players and GMs collaboratively develop the world. “Set out a blank sheet of paper and ask the player who is the most well-traveled to draw a rough outline of the region. Then ask the most social character to draw a point of interest they’ve heard rumors about. Finally, ask the most knowledgeable character to draw roads, rivers, forests, mountain ranges, etc. If anyone hasn’t drawn something on the map yet, they should then add a detail of their choice.”

There are many different places where games can draw the Line.

For narrative authority over a character’s people, Fellowship offers a great example: “You are playing as a hero, a champion of your people, and you are the truth in all things related to your people. When you play as the Elf, you decide what the Elves are, what their culture is like, what they value and care about, what their relationship is with the rest of the world. When someone asks about the Elves, all eyes will turn to you for the answer.”

Stonetop does this as well: players expound on their backgrounds, like The Blessed, who worships Danu, and is instructed in Session 0: “Tell us about Danu’s shrine in Stonetop and how she is worshipped.” But Stonetop draws the Line even more on the side of player control. Like some other PbtA games, it has the GM principle “Ask questions and build on the answers.” Its setting often provides a sketch on a canvas upon which players are expected to paint details. For instance, the crinwin are a threat to the village, and upon the first encounter with them, players are asked a series of questions. Here’s half of them:

This has occasionally been a challenge to my Stonetop players. Sometimes there’s a flight to authority. The first instinct is often to assume it’s written down somewhere: What do the rules say about the Forest Folk? About creatures of darkness? About how to worship Helior? They have to be coaxed to co-create.

In my own games in other systems, I’ve been trying to move the line to where players can add details to the environment that fit the spirit of what has been described before. For instance, as GM I might say, “The thief runs off with your coin purse and ducks into a smithy down the street.” If the player says, “I duck into the shop and grab a poker from the fireplace” that works for me. If she had said she grabbed a tire iron, we’d discuss it! My general rule, taken from Sly Flourish I think, is to describe three aspects of the environment that players can interact with. But, in player’s defense, that leaves a lot undefined. We can expand on the environment together based on common sense and our expectations of the world.

Some GMs may fear that if players share narrative control then they will just make life easier on their characters. That’s not been my experience. My players want to see how their characters surmount dangers. For instance, when I was GMing Atma, one of my players said, “OK, I’m going to stash Sir Leonid in one of my pocket dimensions so he can take a power nap [special move he has].” The player who played Sir Leonid was fine with that. When he was later pulled out of the pocket dimension, his player then said, “I come out, looking disheveled, clearly having just been fighting something. But I see this new opponent and I charge…” Later the first player said, “OK, I pull out whatever Sir Leonid was fighting, to defend me – it’s a chimordial! Argh! Oh, and GM, I fully expect it to turn on me at some point.” As GM, I hadn’t articulated what was happening in the pocket dimension, but these two players took it upon themselves to do so.

Not all players will embrace the ability to share narrative authority to the same extent. In my Stonetop campaign, the Fox, who has wandered the world (in her backstory), often co-creates details of the world. But the Blessed, who has been a homebody, rarely does; partly because of the character, but more because the player doesn’t enjoy that. That’s fine – one game can accommodate different players’ enthusiasm for co-creation, and a good GM can draw the line in different places for these players.

If you haven’t yet experimented with shared narrative control, a one-shot game is a great place to do that. Again, check out One-Shot World, or my resources for running Dungeon World one-shots.

My Session Zeroes have not historically asked about The Line and where it should be drawn. It’s been implicit – as GM, I’m in charge of creation. In the future, I’m going to have to make it explicit: What do the players want? Where are they most comfortable drawing the Line? But then I’m going to challenge them: let’s push the line a little bit past your comfort zone, as you just might find that you enjoy playing even more when you can bring a bit more creativity into the world.

(As always, thanks to the Dungeon World+ and Stonetop Discord groups for helping develop these ideas.)