Damage Rolls with the Main Roll 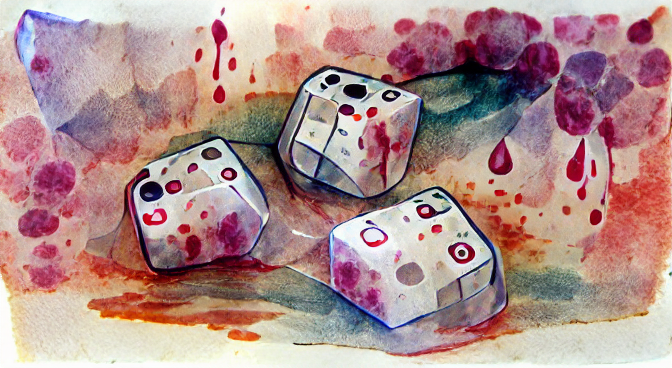 Nothing can be more anticlimactic than to have your RPG character succeed in an attack against a difficult-to-hit opponent, only to then roll 1 for damage.

Jeremy Strandberg makes the case that low damage rolls should at least prompt a fictional change in the opponent’s positioning: “Even when one side rolls low damage (or no damage), look for a way to make the situation change.” An example he gives: “She rolls only a 1 for damage (vs. this guy’s 6 HP), so I say that she smacks the knife out of his hand but doesn’t get the follow-up swing at his face. Because he no longer has his knife, I make his attack softer than I would have.”

When my son and I first played 5e in D&D Adventurers League, we were encouraged to roll damage with the attack roll, to save time. The damage die was just ignored if the attack failed. So for starting characters, they roll a d20 for the attack and a die depending on the type of weapon: d4 (e.g., dagger), d6 (short sword), d8 (longsword), d10 (glaive), or d12 (pike) [5e damage stats]. At least if you had a minor damage amount, you knew it up front.

For Under the Blood-Red Mountain, a gamebook, I turned the traditional 3d6 used in character creation into the core mechanic of the game, almost everywhere but character creation (ironically). You choose your starting stats – an “adventurer” would have 10 for strength, dexterity, and wisdom, while a wizard has 8 strength, 10 dexterity, and 12 wisdom – then use those stats for trait checks. So the wizard needs to roll 12 or under to succeed on a magical attack, then determines the damage magnitude from the wisdom die (the game requires three d6 of different colors). Higher traits lead to higher possible damage.

Similarly, Hard-Knock World, my streamlined fantasy PbtA game, integrates the die roll into the attack roll. You roll a pool of d6 dice for the attack, then read the highest die to determine the degree of success and the next highest die to determine the amount of damage inflicted. The more skill you have for a move (up to 4 dice are possible), the greater the chance the next higher die is above a 1. (If you only have one die, then you deal 1 damage.)

Oh, and while armor in Hard-Knock World works similarly to most other fantasy PbtA games (armor is subtracted from damage), in contrast to those games any successful attack always does a minimum of 1 damage, regardless of the amount of armor the opponent has.

In Spencer Moore’s Chasing Adventure, damage isn’t rolled – a successful attack automatically inflects a condition to a stat (STR, DEX, WIS, INT, or CHA). Sample INT conditions include “dazed, forgetful, concussed,” but any appropriate fictional tag can be assigned. No stat can have more than one condition, and upon a fifth condition, death, injury, or transformation occurs.

Beeptest, on Discord, reminded me that Chris McDowall’s Into the Odd “just goes the other way and drops ‘to hit’ entirely.” From an older edition: “An attack normally causes 1d6 damage, plus any bonus from your weapon, minus the target’s Armour score.”

Alan Scott writes, “On the disappointment of rolling 1s: A guideline I saw once said something like ‘about half the damage should be from a static bonus’. So, 1d6+3 rather than 1d12, for example, means the worst you can get is a 4. Also works well enough if you just roll scads of dice.”

BASIC in Your Browser, Its History, and Gam[…]