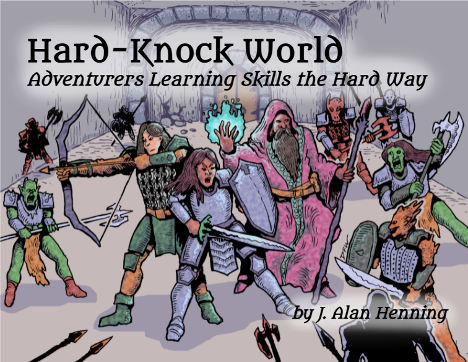 One of the many things I love about Homebrew World and similar fantasy PbtA games (Powered by the Apocalypse inspired) is their druid’s ability to spend time studying a creature and then subsequently becoming able to shapeshift into the form of that creature. My player who was a druid would go out of her way during adventures to master new animal forms that she would be able to turn into. For instance, one evening in a swamp, while the wizard was studying his spellbook, the druid spent time in quiet contemplation of a crocodile. This enabled her to take that form in the future.

Meanwhile, setting aside the spellbook, the wizard can do almost any magic they can imagine, but the GM will tell them how long it will take, what materials it will require, and what restrictions cover its casting.

I love this freeform advancement, based on what the characters are doing in the game. In contrast to the new skills that you acquire by leveling up, typically between sessions, this is diegetic advancement, happening in the story. What if an entire PbtA game were like that?

That was the question I asked myself, and my answer was Hard-Knock World, a streamlined tabletop roleplaying game where players adventure to learn new skills at the metaphorical ‘school of hard knocks’. Each PC can master a new ability related to their class each session, during gameplay—

I started working on the game in June, 2019, at first conceiving of it as a one-page game (double sided). It’s still true that all the players need is their double-sided character sheet; the rest of the 14 pages are resources for the GM, to make the game easier to run. Hard-Knock World drew inspiration from over a dozen sources, most of which are listed on my acknowledgements page. When the Apocalypse Engine (PBTA) Tabletop Game Jam (2021) was announced, I knew that was the motivation I need to finish the game and get it ready. Please check out the submitted games, download the ones that interest you, and provide feedback to their designers!

The Phonotactics of 5E Character Names