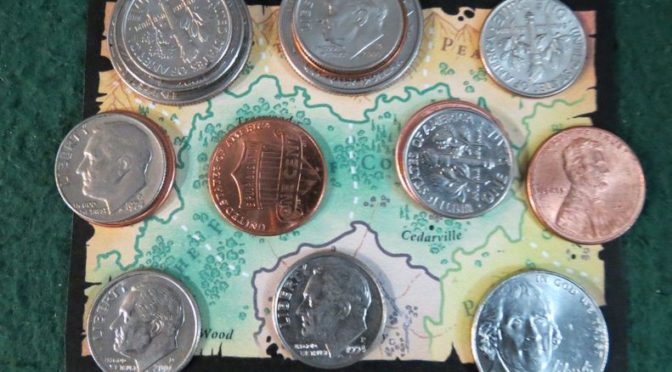 My nickels and dimes, for the year, were:

Last year, like most years, I played unpublished prototypes (my own and my friends’) more than any single published game. (You can download Spin Rummy and Hero’s Arc, two games that I created for contents this year.)

Innovation remains an all-time favorite, always different and therefore endlessly replayable. One memorable session ended with my opponent blasting through the entire draw deck: I had never had that happen before, and I’ve played the game 54 times!

Secret Hitler being played so often reminds me that my game list is a work of collaboration: what games get played is a negotiation, depending in part on what games I can find willing participants for. Since Secret Hitler scales well to high player counts, it made it to the table 5 times, even though I’m not one to suggest it.

Similarly, I play Civilization: A New Dawn because my youngest loves it and wins often at it. It’s fundamentally a race game, but needs more variety in victory conditions to be more replayable.

I’d prefer to play The Golden Ages, my new favorite, but that is harder to get to the table, since the same son hates it.

Add in Civscape, and you can see that four of these top fourteen games are civilization games, which remains my favorite genre.

Even Sushi Go Party! makes the list for civ reasons: I teach it first as an introduction to 7 Wonders, which got just 3 plays last year, as many of my friends have tired of it. (I haven’t!)

Even though I only played 5-Minute Dungeon one evening, I immediately realized it would be perfect for two families, and it became a well-received Christmas gift.

Setting aside the unpublished prototypes, I played 147 different games last year, thanks to the great circle of friends that has grown up around our meetup, Suncoast Gamers.

One resolution: board games that didn’t make it to the table last year I’m going to try and give away this year, to free up some space and to get them to places where they will be better loved.